Several months ago the idea of a Multitool.org logo imprinted tool began being discussed. Since I sell promotional products and have managed the SOSAK Knife Project, our fearless leader, Defender asked me to see what I could find. I stumbled upon a company named Hard Hat Knives and Flashlights. They offer imprinting on a wide variety of tools in their catalog including Leatherman and SOG. The most intriguing tool was the Hard Hat Journeyman. 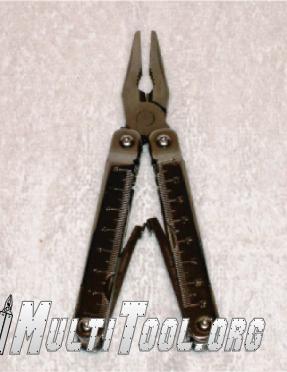 Why most intriguing? Because it looked identical to the tool I recalled as the Bear MGC “Bear Jaws”. After consultation with Def and J-Sews(Bob), I learned that it most likely was a variant of the Bear tool. As has been posted on the forums, Bear manufactured tools that were sold under various names. Everything I recalled about the Bear Jaws was positive and the wisdom I received from our Administrators encouraged me to order a sample.

The sample I received came in a plain box with an oversized nylon sheath. The sheath was so large, in fact, that it would accommodate my SwissTool with room left over. I called Hard Hat and arranged for a more appropriate sheath. In a couple of days I received a smaller nylon sheath that was a better fit.

While on the phone with the Hard Hat rep, I asked her for a little more information about the Journeyman. The only markings on my Journeyman tool are two patent numbers and a metric ruler on one handle. I checked and both patent numbers had been issued to Bear MGC. I questioned that and the Hard Hat rep assured me that the Journeyman was made in their factory. I also asked why, if the tools were USA made the ruler markings were metric and the rep didn’t know. My guess is that the Journeyman is assembled in their factory from parts made or licensed from Bear and Son. In the pictures I have seen of original Bear Jaws tools, the Bear company markings are on the side with the English ruler. Since Hard Hat specializes in supplying the promotional industry, the blank handles would be used for engraving.

The Journeyman is one of three multitools offered as the Hard Hat brand. The others are the Apprentice and the Superintendent. The Apprentice is a key ring size tool that mirrors the Mini Bear Jaws. The Superintendent is Hard Hat’s version of the Super Bear Jaws. In size, the Journeyman is comparable to the original Leatherman PST or current Fuse.

Here it is shown beside my SwissTool for size comparison: 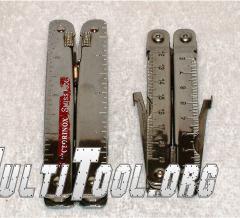 The Journeyman is solidly built and assembled with torx screws. It offers all the things one would expect to find on a multitool: Pliers, wire cutters, screwdrivers, can opener, file and knife blades, both serrated and straight.

The first time I handled the Journeyman it was extremely tight. So tight, in fact, that opening blades was potentially dangerous. I used a couple of torx bits to loosen and retighten until I found a tension that was comfortable. That little bit of adjustment made the Journeyman significantly more user friendly.

All of the tools and blades lock and all of the blades can be accessed without opening the pliers. The Bear MGC Bear Jaws was the first modern multitool to offer that feature.

The locking feature is very much like that on the original Leatherman Supertool. There is a common backspring that locks whichever tool the user chooses. Unlike the Leatherman, the Journeyman has an unlocking lever for each set of fold out tools. Depressing the lever unlocks the tools without the need for opening a second tool. At first glance, the levers look like they would be in the way when using a blade or tool. I didn’t find them to be a problem.

When the using the pliers, the unlocking levers press against each other to form a spring action that opens the pliers jaws. If springy pliers are not desired, one or both of the levers can be pivoted out of the way in the same fashion as opening one of the fold out tools. I liked the spring action of the pliers during use. It made moving from one task to another a little quicker.

Another striking similarity to the Leatherman tools is the propensity for clumping. It is nearly impossible to unfold a blade or tool from the Journeyman handles without getting several others. Some of us find it annoying, some useful. I have found it to be both with the Journeyman. 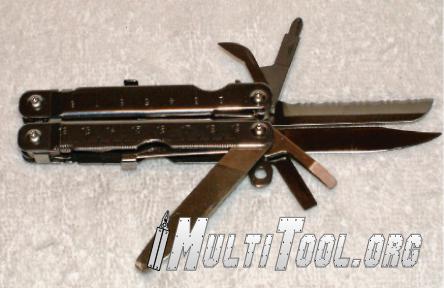 The Journeyman’s pliers are very good and the wire cutters are excellent. I consider stout and effective wire cutters an indication of a quality tool. I tested the Journeyman on several sizes of medium/hard wire including wire hangers. It snapped through all of them without a hitch. For soft wire, I used it on two-conductor with shield speaker cable. The Journeyman’s longer wire cutters outperformed my SwissTool in that test. It required two cuttings to get all the way through the cable with the SwissTool, the longer cutters on the Journeyman did it in one snip.

The wire cutting test also allowed me to evaluate the comfort of the pliers handle. Since the tools can be opened with the pliers closed, the pliers handle is made up of the enclosed, rounded parts of the handles. Using it was similar in comfort to the SwissTool. The edges did not dig into my hands like the handles on a Leatherman Fuse or my old Supertool.

During my months of testing I determined that Christmas is the ideal time to test a multitool. I have a 3-year-old son and was able to give the Journeyman a workout while assisting him with opening new toys at our house and both grandmothers. The knife blades and the pliers came in very handy. 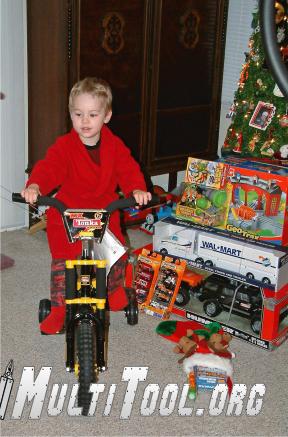 The plain edged blade was sharp when I received the tool, but it would not shave. A few strokes on the kitchen steel brought it up to snuff. During the weeks leading to and following Christmas, the blade was employed on all sorts of plastic bags and tape. It performed efficiently.

The sheepsfoot serrated blade made short work of the plastic fiber strips that are used to secure toys into their boxes. It also breezed through clam packs. The serrations are of the two-step variety and were effective on most any other medium I cut with them. In addition to packaging, I tried cotton webbing and sisal rope. They held up well and only required a little touch up with a diamond rod after all of the Christmas boxes.

I don’t recall needing pliers to open Christmas gifts when I was a boy. I certainly needed them this year. Most of my son’s gifts had wire and plastic retaining devices. The wires were so tightly twisted into such small places that I wouldn’t have had a chance without the Journeyman. The pliers are not quite needle nosed, but they were long enough to reach the tight spots. In every test, I have been pleased with the pliers.

The only discouraging part of my Christmas testing came with the Phillips screwdriver. Overall I find that the #2 size Phillips works for most of the screws I encounter. Unfortunately, the Phillips on the Journeyman is more like a #3. The tip is very broad and not pointy at all. Due to an error in assembling one of the toys, I had to take it apart. The Journeyman driver was too large for the screws. 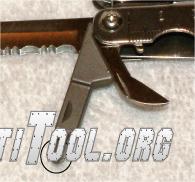 So far, I have used the slotted screwdrivers on the Journeyman enough to say that they work. The file received a little testing on both my fingernails and a small nail that had been driven too far through a board. It handled both easily. I haven’t used the can opener or the lanyard ring, but both appear adequate.

The Journeyman/Bear Jaws is an older design and doesn’t offer all the bells, whistles and nifty gadgets of some of the newer tools. Still it is worthwhile and an effective tool. Those looking for a tool to carry and use could do much worse. For collectors, I think the Journeyman/Bear Jaws represents an important piece since it was the first folding-pliers-based multitool to allow easy, straight from the sheath access to all blades and tools without opening the pliers. The Bear Jaws, Journeyman and other variants are key links in the continually developing world of multitools.

More in this category: « Paladin Power Play PT-510 Review Sheffield Mountaineer Review »
back to top
Interested in this or a different tool and still have more questions?
Why not join us over on the Multitool.org Forum where our community can help you find what you're looking for!