Sometimes the simplest designs are the best, which explains the myriad of one piece tools on the market these days. The Spare Tool follows that example in spirit if not in form. Technically it has more than one piece in the design, and is somewhat larger than the average one piece tool like Atwood's Prybaby, Gerber's Shard or Raker's Ring Tool. However, it does fit the pattern of a basic prybar, bottle opener and a few other functions rolled into one basic piece of steel like the others. 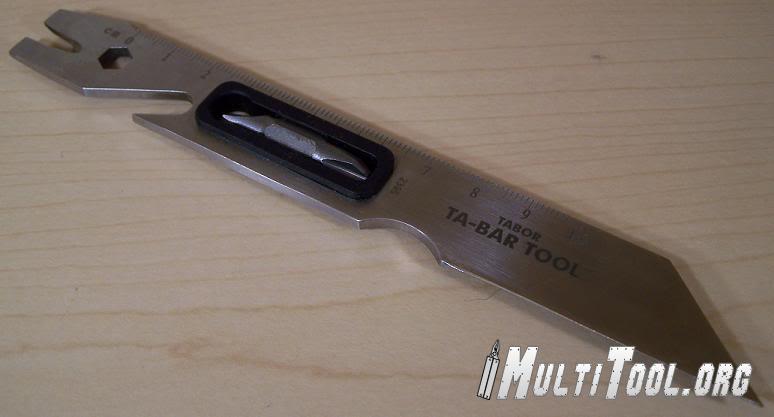 At first glance the Spare Tool is nothing more than a pry bar with a bottle opener cut into it- something every tradesman should have in my experience! The pry bar has a substantial notch cut into it for pulling nails, and it's also got a slight edge inside which is handy for cutting twine and is also effective for slicing open clamshell packages- the bane of the 21st century consumers.

After extensive testing, I can also attest to how well the bottle opener works, but by mutual consent, the details of that testing phase are classified. Suffice it to say, it does what a bottle opener should- it opens bottles. 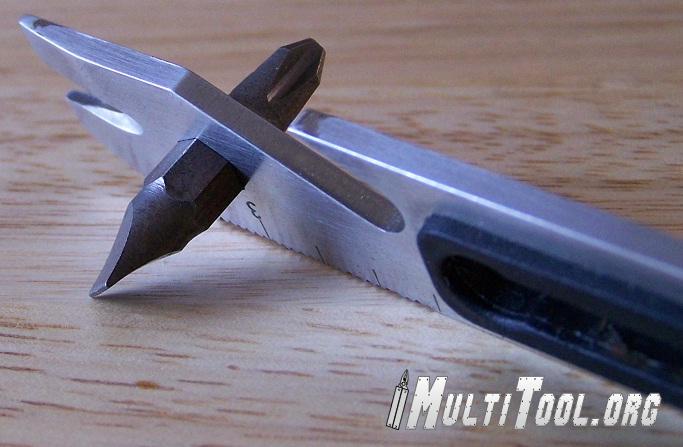 In addition to the bottle opener and prybar functions, the Spare Tool also has a 1/4” wrench which can be used by itself to loosen stubborn computer case screws, or in conjunction with the double ended screwdriver bit nestled in the body of the Spare Tool. The double ended screwdriver has both a flathead and phillps end which is typical for an EDC type tool. Because it has to tuck into the body of the tool it's fairly short, but you shouldn't have too much trouble reaching in to get screws recessed up to about ¾ of an inch deep which is not bad for a multitool- many more expensive tools don't have that kind of reach. Plus, since it's a standard 1/4” wrench, it should fit any 1/4” bit, which can be obtained almost anywhere, so if you find yourself needing different types of bits (Torx, Posi-drive, Robertson etc) or different lengths, then you can carry those along too. Because the bit is held at 90 degrees to the main body of the Ta-Bar Tool it works as a T-shank type screwdriver, allowing for a significant amount of torque to be applied as well.

While this next feature may be controversial in it's usefulness, it is there nonetheless- under a molded plastic cover is a very sharp chisel ground blade, similar in shape to a box cutter or utility blade. Did I mention it was sharp? Out of the box this thing cuts like a razor blade and should be very easy to maintain due to the flat grind. It also has a very sharp point which is very handy for marking or boring holes, but may be somewhat fragile- I haven't wanted to risk the nice tip by subjecting it to any torture tests! Suffice it to say, you should probably not use this knife to stab any armored individuals if you want to keep it in good shape! 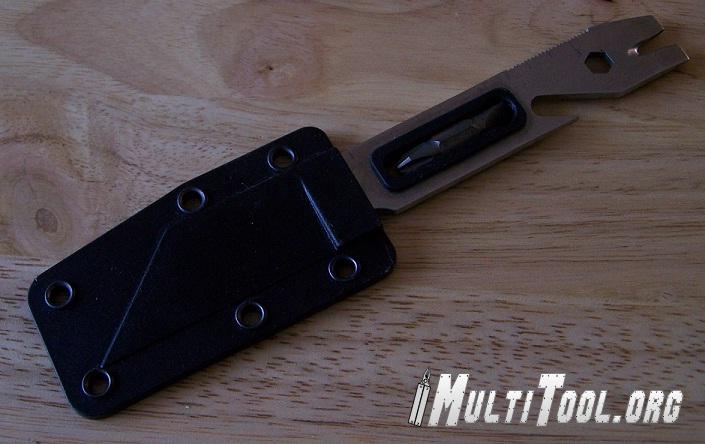 The controversy comes from whether or not the sheath will hold on to the blade well enough when using the opposite end of the tool as a pry bar. If it isn't then the user could end up with a significant cut to their hands. The edge, in case I haven't mentioned this previously, is very sharp, and adding pressure when prying, couples with even a small slip or sheath failure could result in serious injury. However, the Spare Tool is designed for light prying, and this should be kept in mind when using it. If you feel you are putting significant pressure on the Ta-Bar Tool during use, put it away and get a dedicated pry bar.

Along the spine of the Spare Tool is a small ruler with inches on one side and centimeters on the other. It measures up to 3 inches or ten centimeters, which can come in handy for things like writing a review of the Spare Tool when you forgot your tape measure and calipers. I don't usually use the ruler function on any multitools, but the few times I have, I have appreciated that they were there, and the Spare Tool is no exception.

The sheath itself is little more than a plastic cover- it's a pancake style sheath, with two thin layers of a kydex-like plastic molded over it and rivete together on three sides.  It's a bit bulky, and has no clip or loop of any kind for carry/mounting purposes. The hollow rivets are handy in that you could use some paracord to strap it to something or create your own belt loop, and it looks similar enough to many neck knife type sheaths to make you think you could carry it on a lanyard around your neck. I wouldn't suggest this as an option as the sheath does not hold the Spare Tool securely enough for upside down carry, and a sudden jolt could cause you to lose it.

The bottom line here is that the Spare Tool is an inexpensive tool that can be very effective under the right circumstances. I can see the benefits of this tool for a contractor or do-it-yourself-er as it combines a number of useful tools that are versatile and easy to access and use. As with any multitool, you shouldn't expect the Spare Tool to replace a strap cutter, box cuter, pry bar, measuring tape and screwdriver, but it can be used for quick jobs that don't warrant crossing the room to the toolbox. When used within it's capacity, and based on it's suggested retail price (under $20) I see no reason why everyone shouldn't have a Spare Tool.