Like it’s Squirt brethren the P4 and E4, the Squirt S4 is a very handy, bright tool that functions well beyond it’s size. It is closely matched to the predecessor of the Squirt line, the Leatherman Micra in that it’s main tool is a set of very capable scissors. Despite not being a large tool, the scissors are quite functional, and the handles are very comfortable to use.

The scissors are virtually identical in function to those on the Micra, using the same reliable backspring mechanism and the same length scissors, although the blades have been rounded a bit to keep with the aesthetics of the Squirt series. Otherwise, they are the same length and the actual business end is virtually identical. Since I’ve never been a big fan of redesigning features that are perfect the way they are, I consider this continued use of the backsprings and scissor blades to be a good thing.

One improvement over the Micra, despite the S4's brighter exterior and more ergonomic shape, is the outside opening tools. With the Micra, the scissors had to be opened to access any of the screwdrivers, nail file etc, however the S4's tools can all be accessed without opening the tool. This is a very handy feature for a keychain tool which more often that not is used for quick jobs that shouldn’t require a trip to the toolbox- basically making a fast, convenient job faster and more convenient! 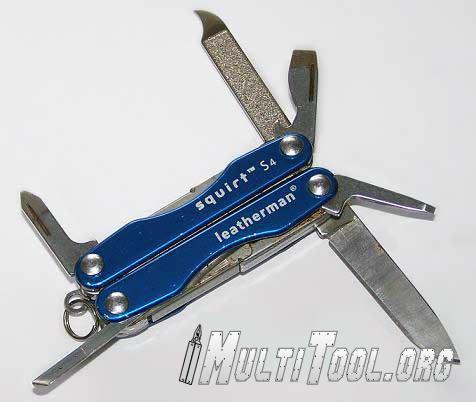 The small clip pointed blade is identical to the one on the Micra and the other Squirt models and is everything you could hope for in a small blade like this. It reminds me of the small keychain sized Opinel blades that I was so fond of in my younger days (and still am!) and is easy to keep razor sharp. Given it’s slim geometry it manages to cut as well as a larger blade yet is small enough not to draw attention from other folks in the office.

Again improving on the Micra’s design, the S4's nail file has a small ruler printed on the backside. As the entire implement is only about an inch and a half long, it’s not overly functional, but it’s nice to have as otherwise the back side of the nail file is just wasted space. It’s a little thing, but again, the one time you need it, you’ll be glad you have it!

The next corner of the S4 has a small bottle opener with integrated screwdriver and a flat, pointed hunk of metal for use on phillips screws. This section is perhaps my least favourite on the Squirt series in general. While functional enough, the phillips driver works only marginally better (if that) than a flathead would, and not at all on flathead screws. I can’t help but think a dedicated flathead or other tool would be more functional. The flathead on the bottle opener is excellent, but the bottle opener is too small to be really effective. It works, but you should be prepared to uncrimp a few points on a bottle cap before lifting it off. Not a big deal, but the opener on the Micra and other keychain tools is more effective. If you are a big fan of import beers, you may want to look elsewhere. 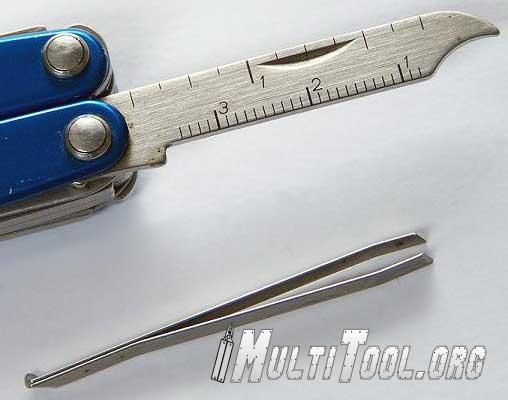 The final corner of the S4 has a nice little eyeglass screwdriver, which is very effective. It’s the same dedicated screwdriver that is found on all three Squirt models, and is very useful, especially with the rising number of small screws the average person is faced with these days in electronic devices as well as glasses! The other little hidden treasure in the S4 is a set of removable Swiss Army Knife style tweezers. On the Micra the tweezers were a permanent fixture and the weight of the rest of the tool made fine work awkward with them, but the tweezers found on the S4 are very light and highly functional. The tips are angled to give you the benefits of both flat and pointed tip tweezers and they slide securely into the slot so you aren’t likely to lose them.

To maximize usefulness of the Squirt series when placed on a keyring, I’d suggest some kind of quick release clip so you aren’t swinging your keys around during use. I personally use an On/Scene Tactical kydex rig, but anything that allows you to quickly separate and re-secure the tool to your keys or any other carry method is better than trying to use the tool while still attached.

More in this category: « Leatherman Squirt P4 Review Leatherman MiniTool Review »
back to top
Interested in this or a different tool and still have more questions?
Why not join us over on the Multitool.org Forum where our community can help you find what you're looking for!