Call it “survival of the fittest” or “trial and error” but it all boils down to one conclusion- Evolution is a wonderful thing. Anyone who spends any time reading my various ramblings and ratings of various tools knows that I am more fascinated with what didn’t work than what did, and more importantly, how the oddball ideas evolved into the successful tools of today. The Mini Tool is another fascinating example of what didn’t work, but played an important part in the design of some of the tools Leatherman is currently producing. Marlon Perkins would be proud! 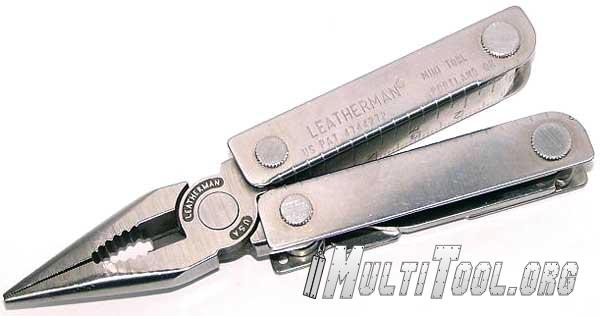 The concept was a simple one- a full sized set of folding pliers in a small, convenient package. Simple physics got in the way a bit- apparently it’s not possible to put something large into something small, but my guess is Leatherman’s designers never studied law the same way Bugs Bunny never learned about gravity!

Using an ingenious double folding handle the Mini Tool takes up just a little more real estate than the Micra or other keychain sized tool. In fact, the Mini Tool is only slightly bigger than SOG’s entry into the keychain market, the CrossCut and CrossGrip models. Fold out the handles once and you get pliers with a standard sized head but very short handles- great for small jobs, but with very little leverage. From there the second portion of the handles, hinged where the implements normally are, folds out, giving you a full sized tool on par with Victorinox’s Spirit, Leatherman’s PST or SOG’s PowerPlier. It is a fascinating design and a great solution for folks who wants a very small tool that can perform like a larger one. Of course the handles aren’t as sturdy as a single solid handle would be, but that may account for why there is no hard wire notch added to the base of the wire cutters. 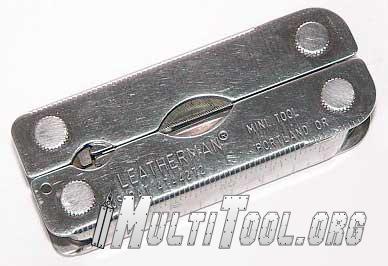 Like any design though, the Mini Tool is not without it’s drawbacks- most notable of which is that while the tool itself is small, so are all of the implements. That’s not too big a concern however, since the bigger problem is that there aren’t many implements hiding inside to begin with.

Inside the Mini Tool there’s a small (and I mean tiny!) clip pointed blade and a short file. The handle extensions have cutouts for opening cans and bottles, but are quite inconvenient to use- I’ll get to that in a minute. 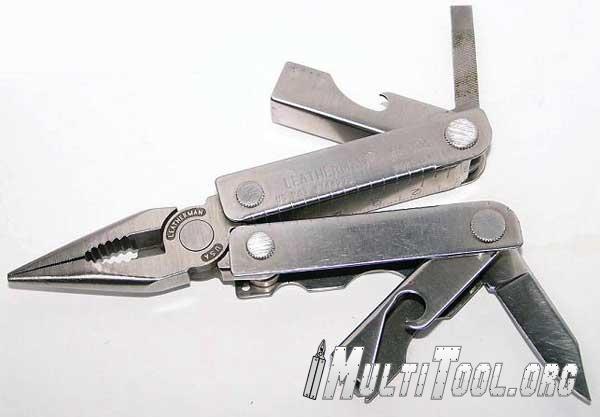 Much like the short, vestigial arms of the tyrannosaurus rex, the small blade on the Mini Tool is virtually useless- it’s little more than a showpiece really. Since the Mini Tool is an inside opening tool you loose functionality of a certain portion of the blade as it’s blocked by the opposite handle. This doesn’t leave much useable blade unless you fold the handles to 180 degrees, which could be unsafe due to the handles not locking at that angle, and the blade not locking at all. You can use the entire edge easily in this configuration, but the staff and management of Multitool.org is not responsible for loss or damage to your fingers or anything else if you try it that way. Bottom line, if you do it, you are on your own.

The file is also very small, and the textured surface is barely a thumprint and I have small thumbs. A nail file might have been a better choice in this size as you won’t get much throw with it any other way. Also, it looks like the tip of the file is supposed to be a screwdriver, but I have a second hand Mini Tool that attests to the fact that this is not a good idea. 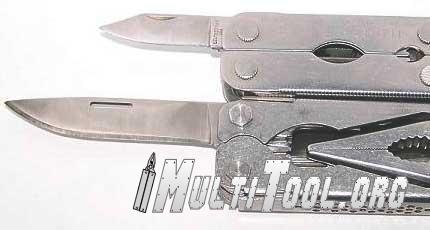 The bottle opener is awkward, but usable. Because it’s cut out of one side of a U shaped piece of sheet metal it is somewhat difficult to grab and remove the cap. The can opener has similar problems, but since it is designed to work on the edge of a can it is somewhat less awkward. Unless of course you are left handed. The cut out is only on one side and is oriented for the right handed user. 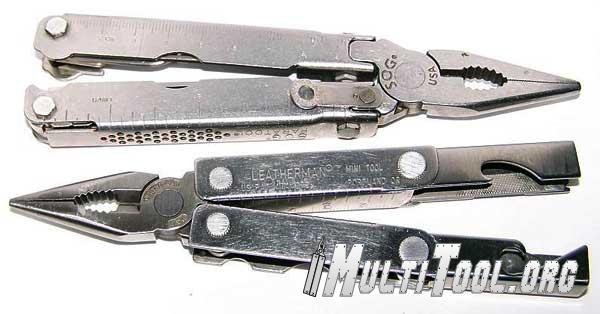 The other drawback is kind of a silly one- the points of the needlenose pliers stick out a bit from the end of the tool when folded and can poke you if you carry the Mini Tool in a pocket. Please don’t ask how I know this, or to demonstrate! 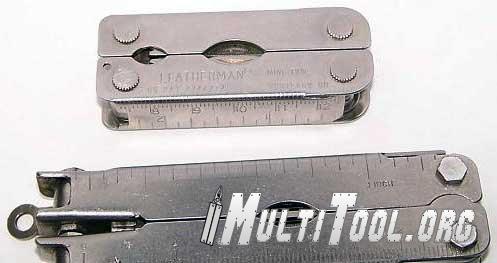 As I said before, if it weren’t for the concept that the Mini Tool was created to fill, we wouldn’t likely have compact tools like the highly successful Juice series today. It was an early answer to a question that, at the time, only Leatherman knew. If you are looking for a robust, functional and compact plier tool, look at the SOG CrossGrip or any of Leatherman’s Juice series. If you are a collector fascinated by missing links and duck billed platypus’ then this is just the anomaly for you! 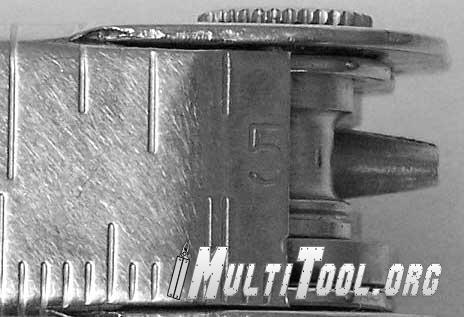 More in this category: « Leatherman Squirt S4 Review Leatherman Skeletool Review »
back to top
Interested in this or a different tool and still have more questions?
Why not join us over on the Multitool.org Forum where our community can help you find what you're looking for!