The KF4, though now retired, was introduced by Leatherman in 2001 with the launching the Juice line. It’s been released in “solar” yellow as well as “storm” grey. You’ll also see my customized beater in a few picks.

As far as the tools go, the KF4 tool list reads like a fully equipped large multi-tool, with the notable exceptions of scissors and can/bottle openers. Everything on this tool solidly snaps open with back springs like a slip joint pocketknife. 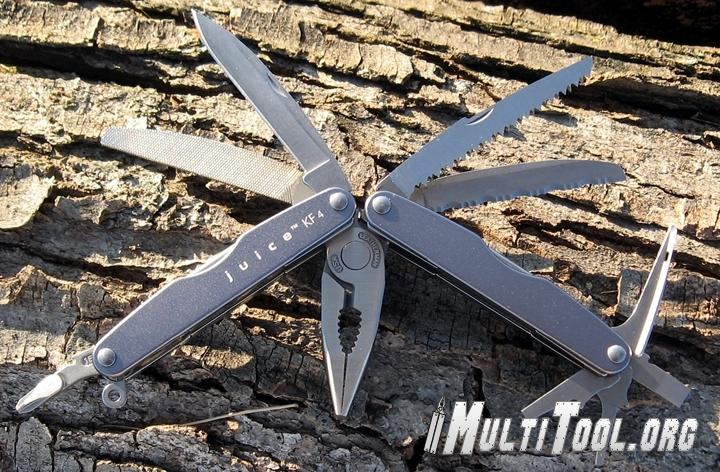 Size
The tool is a medium size; significantly smaller than most common full sized multi-tools, but a lot bigger than the standard keychain fare. For me it’s on the large side of “pocketable”. 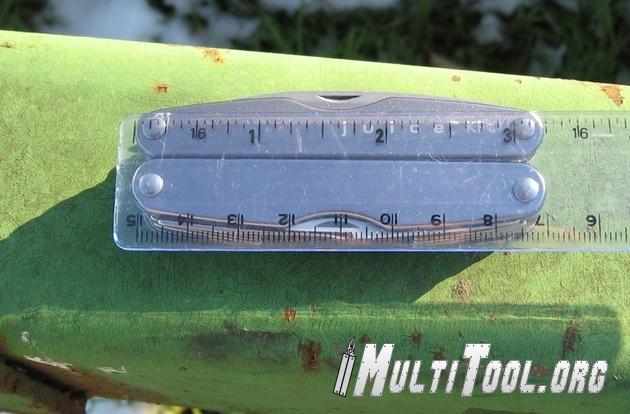 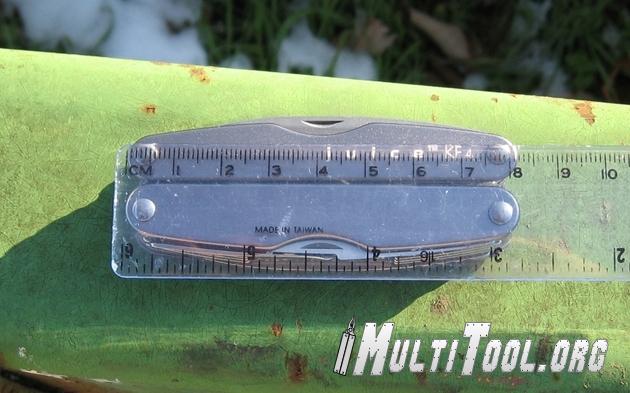 Larger than a Micra: 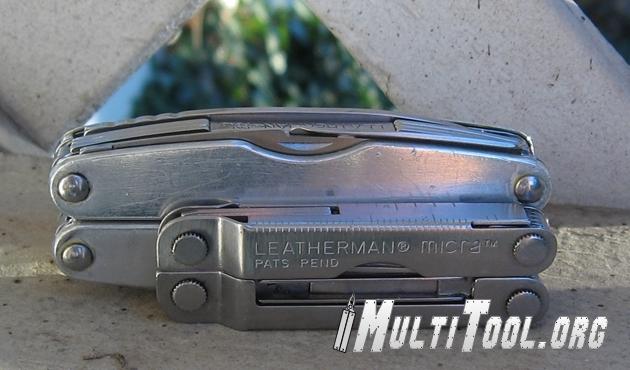 More pocketable than a PST: 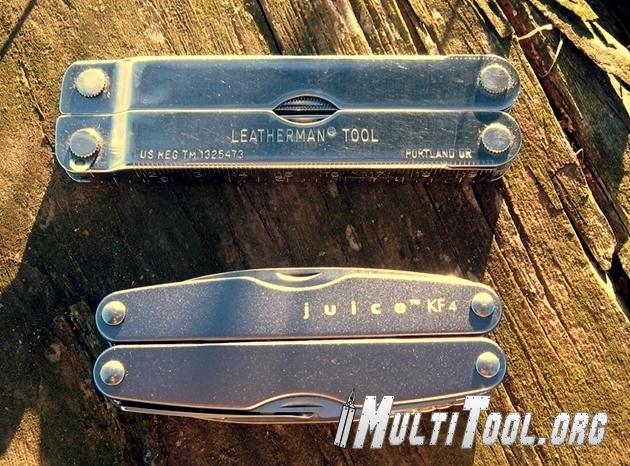 Smaller than a Super Tool 200: 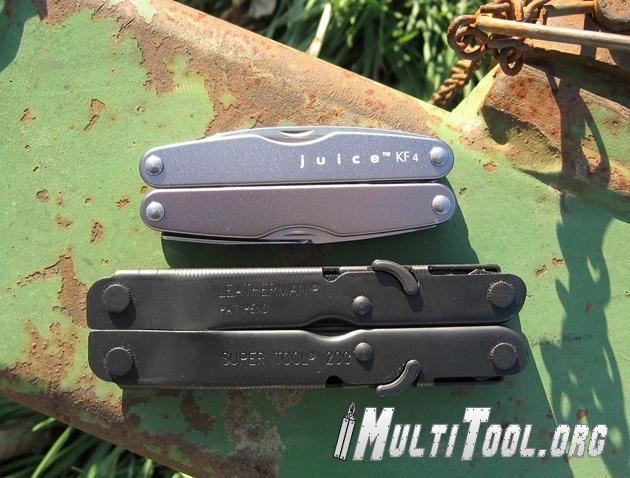 Thickness compared to a Juice S2: 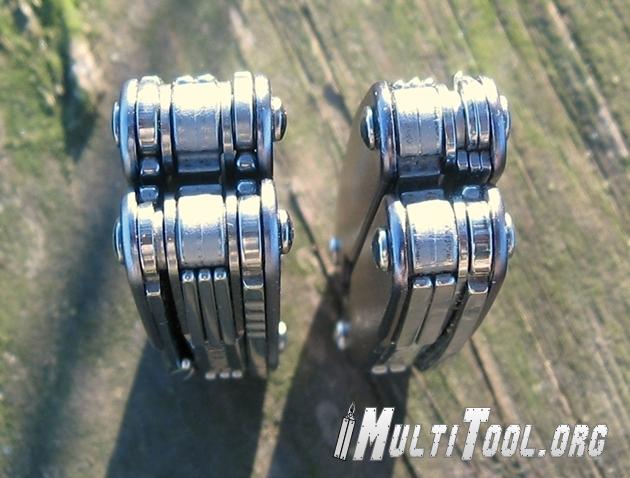 Plain Blade
To me it’s a very nice length- just a hair over 2.5 inches (6.5 cm). That, along with its slip-joint design, keeps in legal in most places, but still long enough to be very useful. Its edge holding is nothing special, but it sharpens up quite easily. 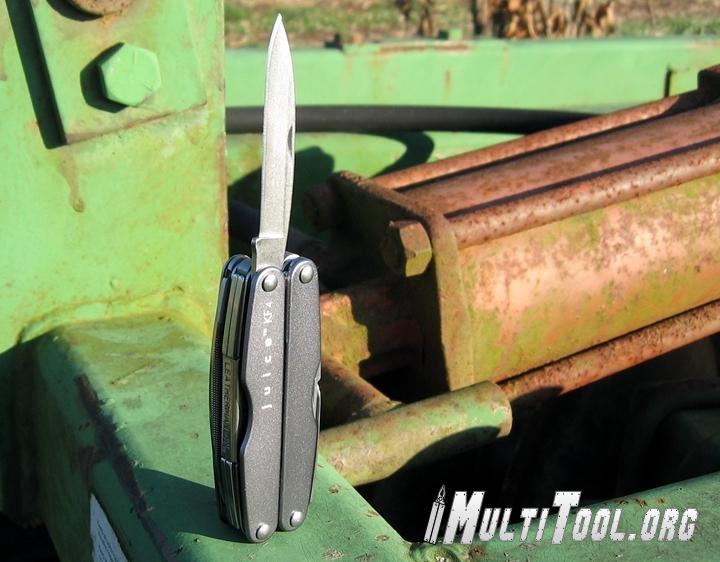 Serrated Blade
Same length as the plain blade, but the point comes down in a sheepsfoot pattern. The plain edge at the tip helps make up for lack of scissors if you keep it sharp. The serrations are designed well and cut effectively. 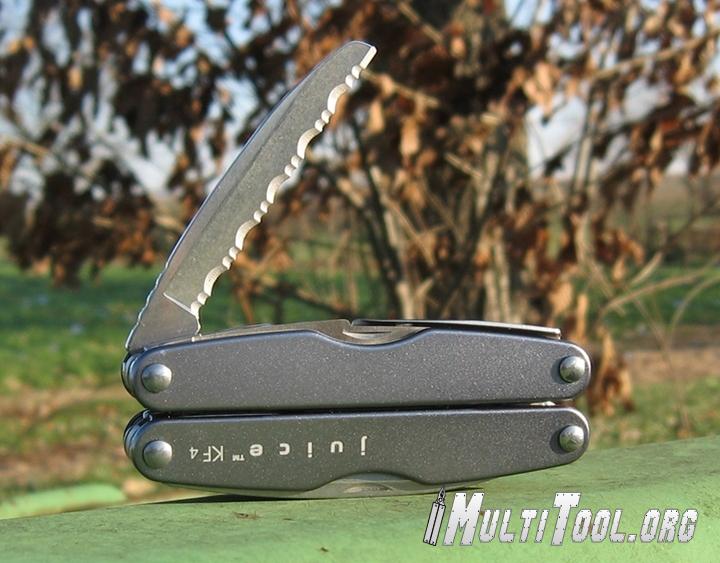 File
On both sides the cutting surface starts close to the handle and extends to the tip, giving the most usable edge possible. I’ve used the standard side on both wood and metal, and it’s worked great on both. On the other side, the diamond file is something special- very fine and yet quite aggressive. Lastly, there’s a “metal saw” on the edge, but to be honest it’s not all that functional. 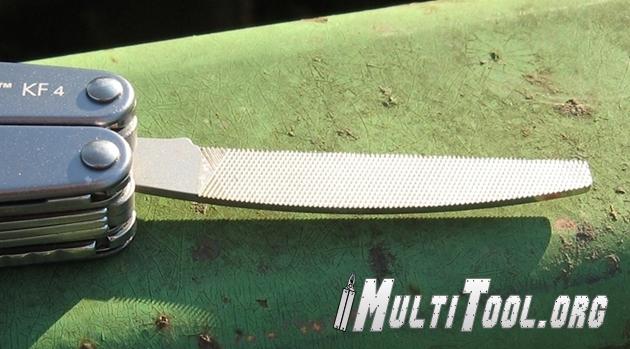 Awl
The awl on the KF4 isn’t very sharp, but it is a handy feature, and works great for putting clean holes in drywall/plaster, and general poking around. 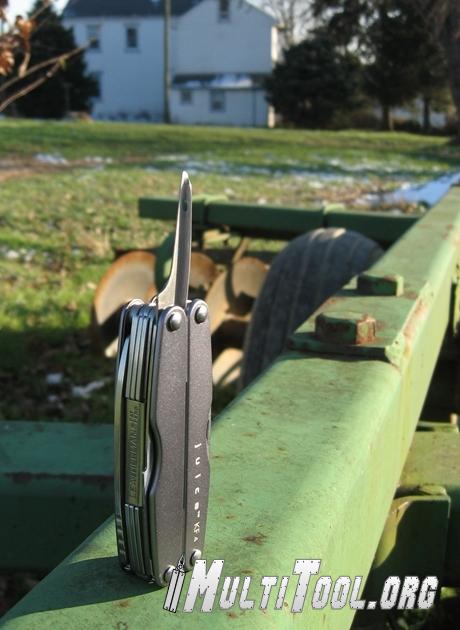 Next to Surge & PST: 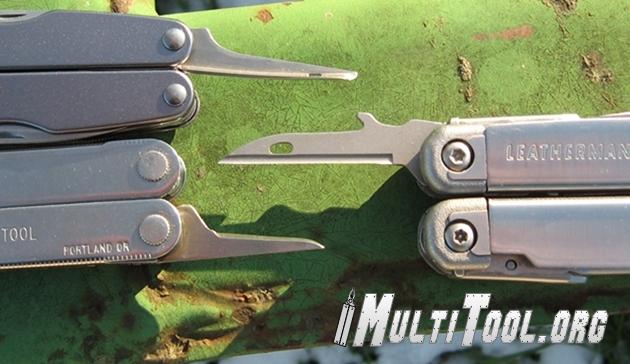 Saw
It’s thin, it cuts well, and is amazingly long for the tool’s size. The saw is placed in the same slot as the awl, which needs to be opened to get to the saw. 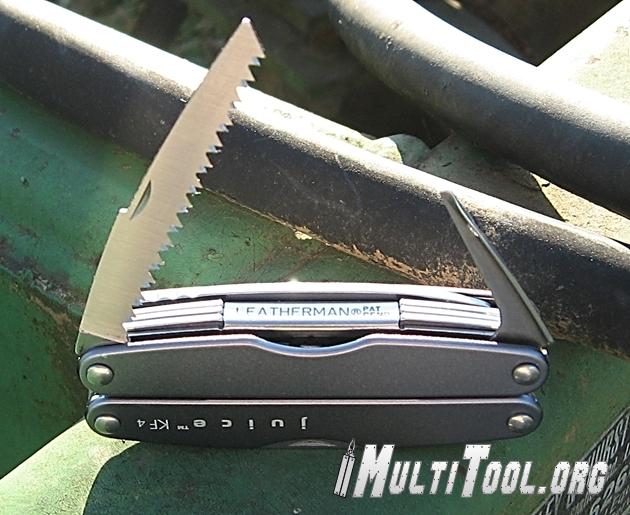 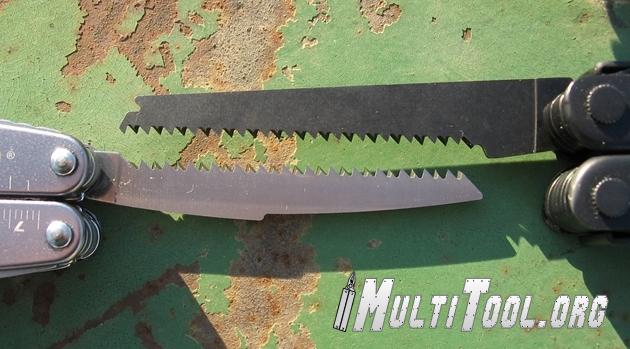 Ruler
The KF4 was the only Juice to have a ruler printed on it’s scales:

Pliers
Though they are not as strong as a full sized Leatherman, they open wide. And more importantly, they feel nothing like a keychain. The wire cutters are small but functional, and the hard wire notch works well. 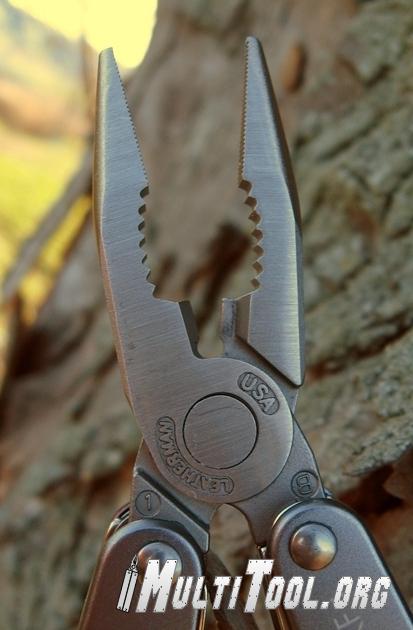 With PST and Surge: 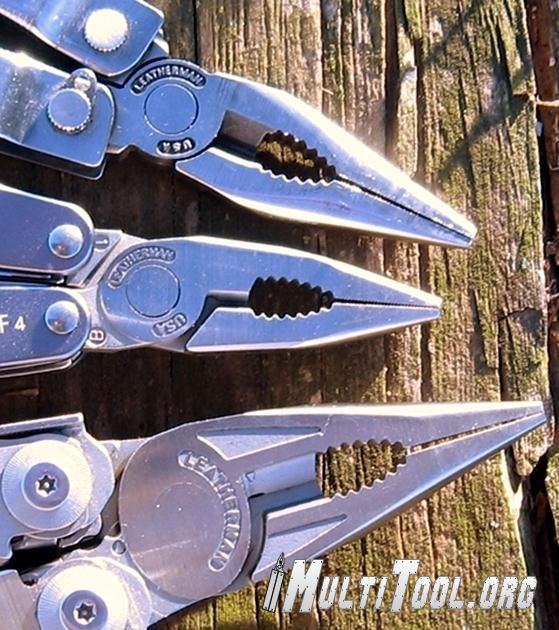 Phillips
Nicely cut, fits both #1 and #2 Phillips heads equally. I can use this as fast as a “real” screwdriver when it’s stretched out. 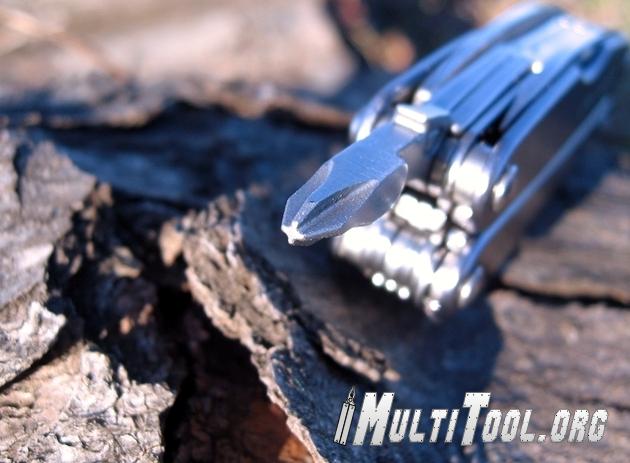 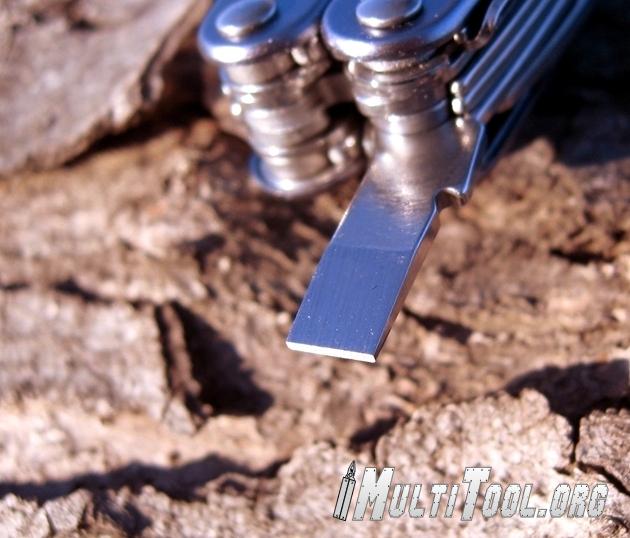 Flat Drivers
There are medium, small, and eyeglass sizes. All are chisel ground, but have worked well for screws and light prying. 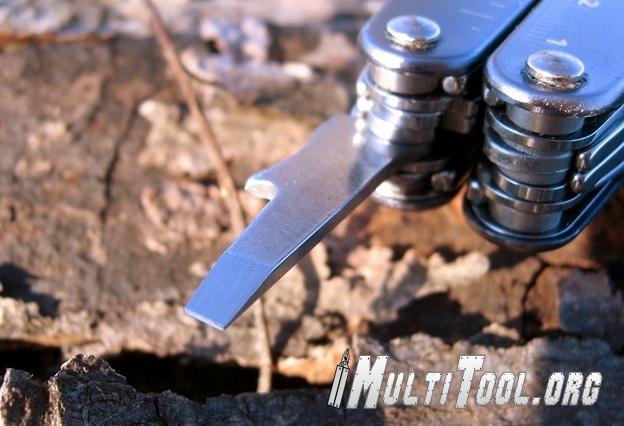 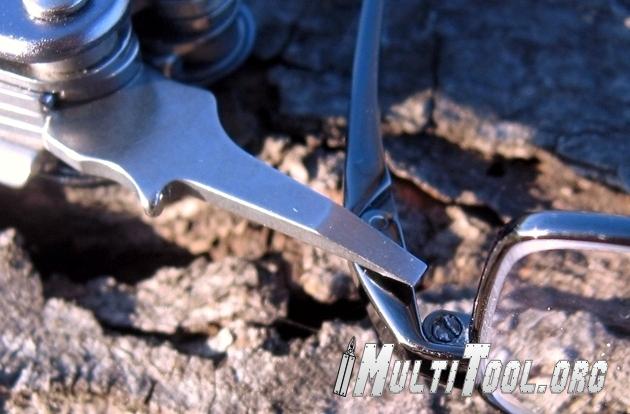 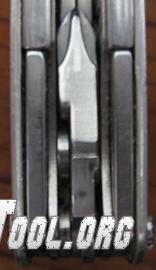 Lanyard Ring
It’s small, and hides away in a cutout in the Phillips without wasting any extra space. It does require some tool, like a key, to open it.

Hiding beside the Phillips: 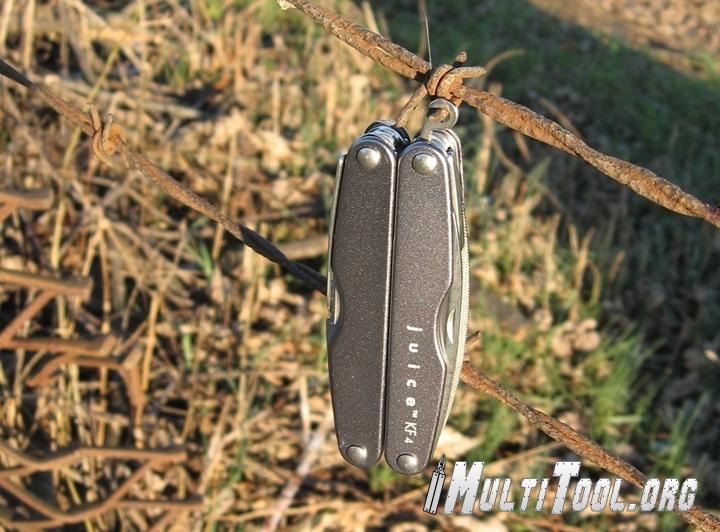 More in this category: « Original Leatherman Super Tool Review Leatherman Freestyle and Freestyle CX Review »
back to top
Interested in this or a different tool and still have more questions?
Why not join us over on the Multitool.org Forum where our community can help you find what you're looking for!