I got this bag a few weeks ago, but for one reason or another I was unable to post some initial thoughts until now.

I had wanted a bag a little smaller than my usual Maxpedition Tactical Operator bag that I usually carry- it gets a bit heavy what with a laptop (old, heavy Toshiba Satellite), a tablet, miscellaneous accessories, paperwork, pens, a few tools and so on, so I wanted something that was going to hold all the essential stuff but force me to minimize the clutter.  I found what I hope will be the bag I'm looking for at http://directactiongear.com/ although they do have their work cut out for them.  I am hard on bags and few last more than a year with me.  But, on to some pictures so you know what I'm talking about! 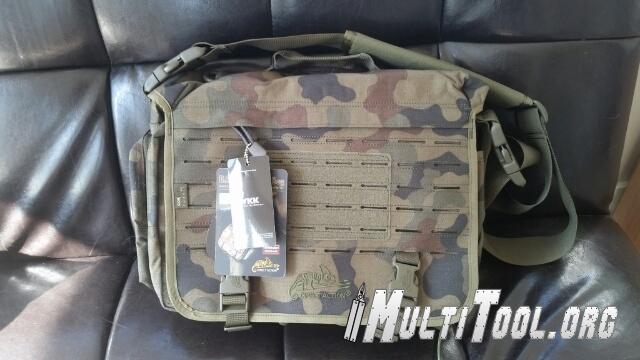 I opted for the camoflage pattern instead of the usual black, coyote tan or olive drab that I usually tend to favor just to mix things up.  As you can see it has the laser cut type MOLLE attachments on the front panel.  I like this idea as it means that I can add pockets or sheaths to it that I feel I might want, in case I find the bag too small to carry everything.  I love versatility in an EDC item and this is one good way to do it.  I did find the laser cut stuff a bit difficult to feed MOLLE loops in and out of, but once something is on there, it feels like it's on for good, which is really what you want.  Maybe not ideal if you are the kind of person that tends to swap gear and pouches out often, but then it may also loosen up- time will tell with this one, and I look forward to trying it out on a few adventures. 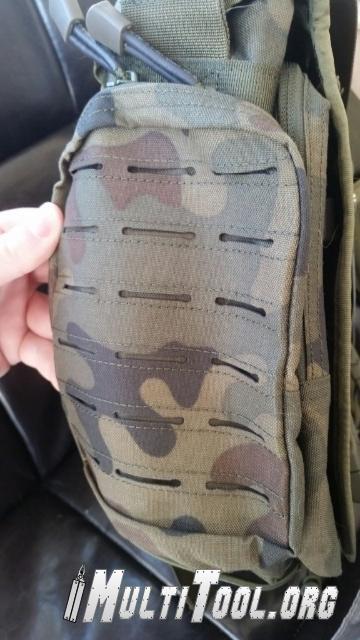 The side pocket has some more MOLLE cutouts, which is nice, so you don't have to have bulky items hanging off the front.  I find some stuff just sticks out too much, and it's more convenient on an end than the front. 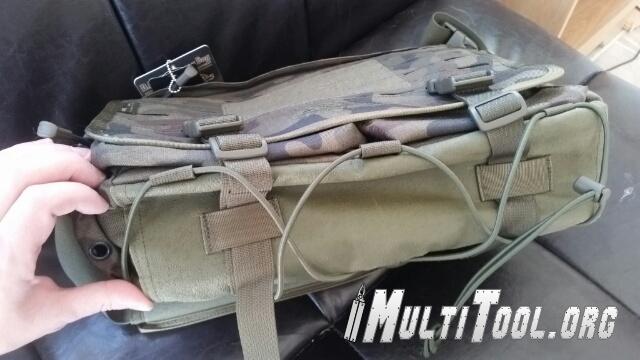 There's also some shock cord on the bottom for attaching larger items- portfolios, bedrolls, big flashlights etc would each fit in here nicely and be quite convenient and not take up any internal space. 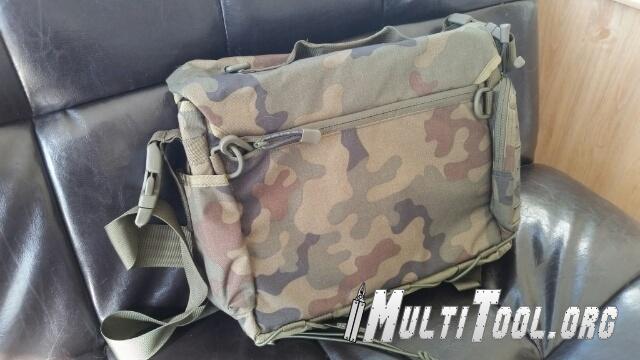 On the back side there's a large zippered pouch, but what's that sticking out of it? 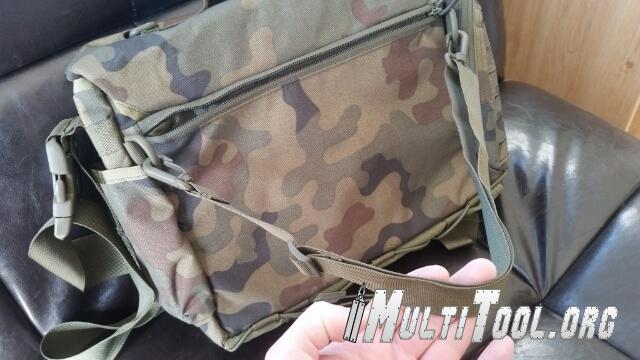 Oh, it's a removable waist strap!  Handy for keeping your messenger bag from flopping about too much, or easily removable if you don't want your bag stuck to you.  Very nice feature, and can be removed easily if it's something you don't care for.  I like extra touches like that. 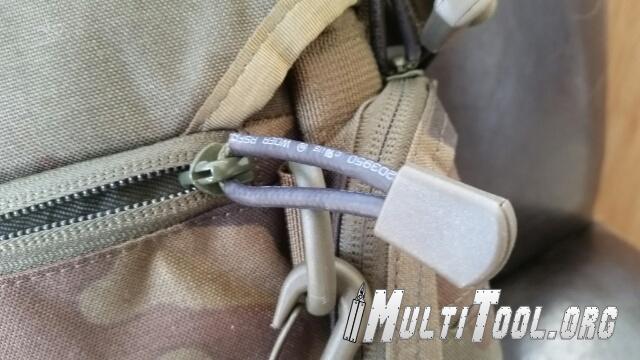 Speaking of extra touches, look at these zipper pulls!  These have to be some of the toughest looking zipper pulls I've ever seen on a bag or anywhere.  They are the usual heavy cord, but then covered in a sleeve of what looks to be heat shrink tubing, then locked into a plastic end.  I don't see these coming apart any time soon.  As much as I like versatility, I also admire toughness, and if the rest of the bag is as robust as these zipper pulls then I think we may have a winner. 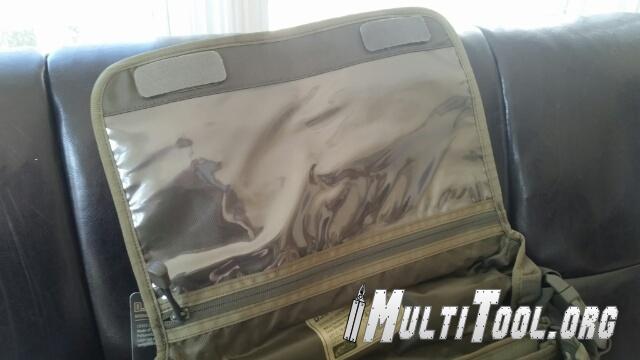 Opening up the bag we see a couple of velcro strips on the inside of the cover, which would connect nicely to the velcro on the base of the bag, however if you don't want the bag closed by velcro (ie you need to be stealthy!) then you can leave the tabs on it, as seen in the photo.  Again, another nice touch.

One problem I have with this flap is the plastic panel.  My Tactical Operator bag could probably pass for almost new even though it has been through many adventures over many years, but the plastic panel in it looks like crap.  And, it's just a small plastic panel.  This one is HUGE.  It might be handy for sticking a map in and reading it on the way, but I would honestly rather have some mesh or something that isn't likely to yellow and crack.  This is probably my biggest disappointment in the bag, although I will keep an open mind and see how it holds up over time. 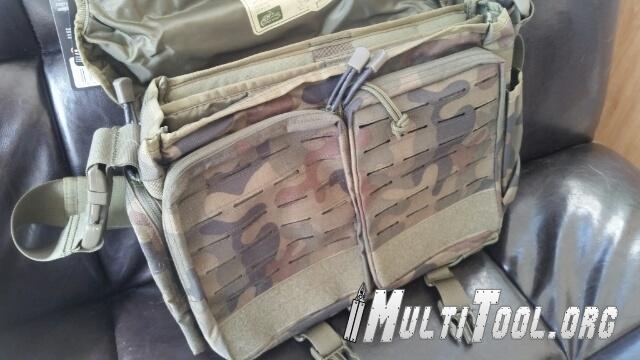 Once the flap is opened we see there are two pouches with more laser cut MOLLE panels on them, and the other half of the velcro that would/cold hold the top flap down.  I actually really like these two pouches, and here's why: 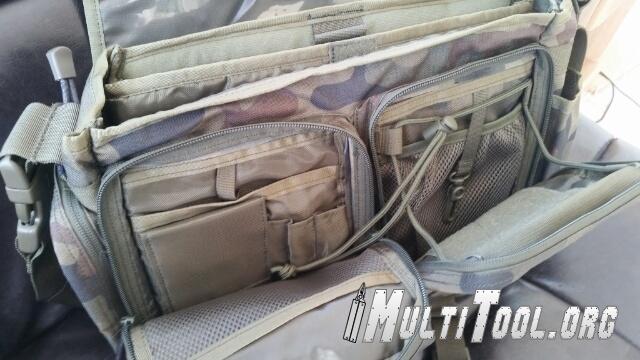 A lot of times the pouches are so generalized that only about half the pockets are useful while the other half are just sort of "close enough" or really not much use at all.  Or the pouches will be empty, with no potential for organization inside at all.  This bag seems to have found the happy medium- a few specialized type pockets (pen slots, card sized pouches etc) but also have some versatility for oddball equipment, which is good because that's the kind of thing I need at work. 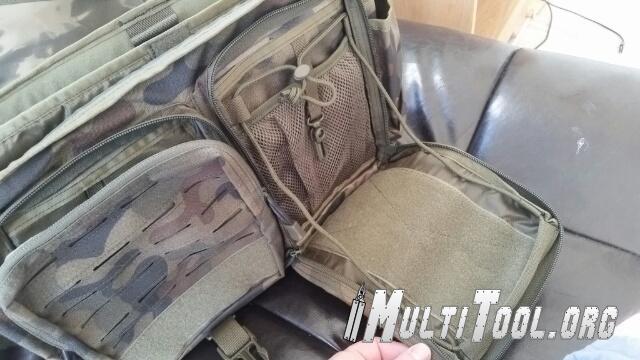 For larger, bulkier items the pouch on the right unzips all the way to the bottom on both sides and opens with a drawbridge type string- good for oversized items that just wouldn't fit any other way. 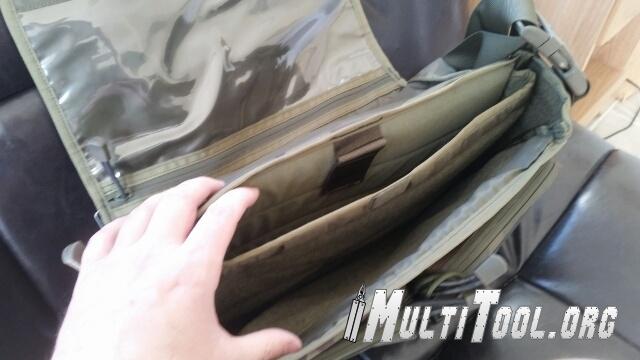 Like most bags the main inside pocket has two sections- ideally one for paperwork and one for a laptop.  My old Toshiba laptop (15.6" model) is just a bit too big to fit in the larger pocket, but Megan's new 15.6" HP laptop fits in the big pocket nicely.  My HP Split ultrabook fits very nicely in the smaller pocket, so unless you are a dinosaur with an ancient laptop like I am, this bag should handle whatever machine you need to put in it. 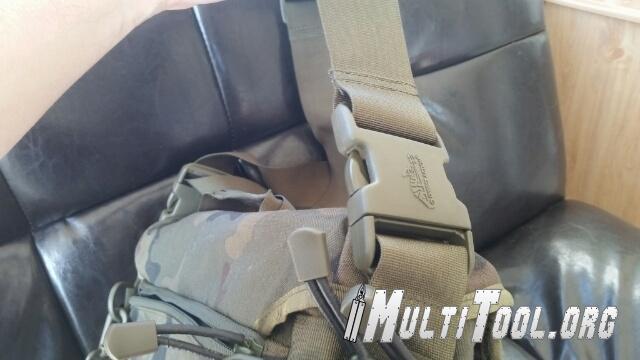 Last but not least, the shoulder strap is also removable, but is very secure feeling since it uses these large buckles rather than the more common swivel clips to hold on. 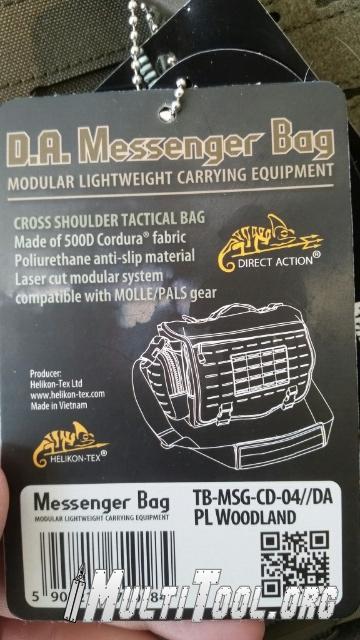 Overall this seems like a very rugged bag.  As I said, time will tell if it really stands up to day to day use and (more than) occasional abuse.  I've been a big fan of Maxpedition for a long time, and have been somewhat unimpressed by some offerings from other companies like 5.11 Tactical- they seemed like good ideas but with too many corners cut and too many compromises made.  The MSRP on this bag is $109 which seems a bit pricey, but not too far off from Maxpedition stuff- my Tactical Operator bag has an MSRP of $156.99 for comparison.

The plastic panel has me in some doubt, but otherwise I think this bag seems like it will walk the walk.  I'll report back from time to time with updates on how it's doing and whether it is keeping me as optimistic as I am right now.

More in this category: Moon Cheese VS Tactical Spork »
back to top
Interested in this or a different tool and still have more questions?
Why not join us over on the Multitool.org Forum where our community can help you find what you're looking for!